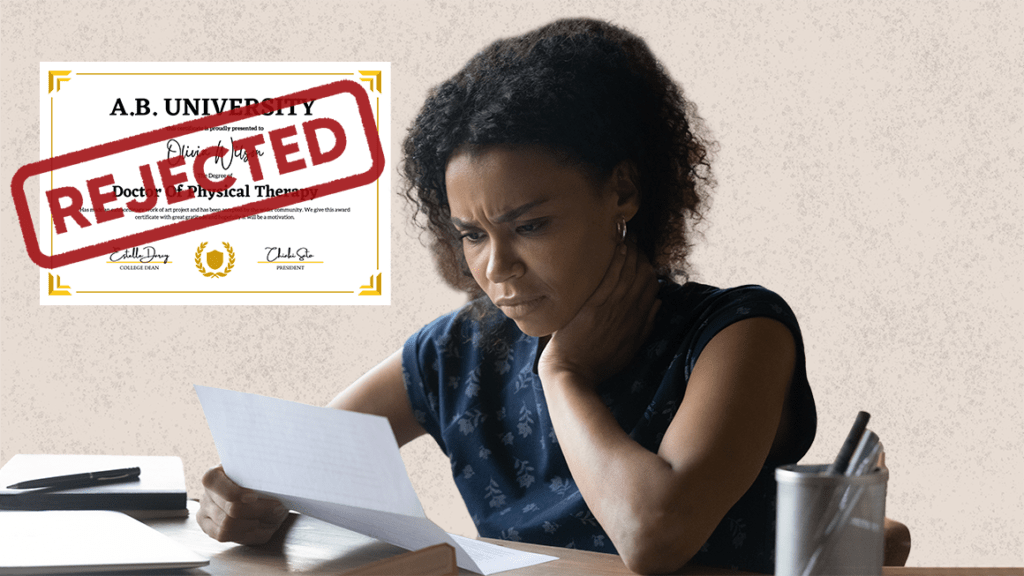 One More Hurdle: How Students Face Unequal Barriers to the PT Profession

In an official 100-meter hurdle race, everything is perfectly fair. Every racer jumps over exactly 10 hurdles that are adjusted to be exactly 33 inches high. Every subsequent hurdle is placed 8.5 meters away from the previous one—and everyone who runs the race starts at the exact same time in the exact same weather conditions. This is the ideal way to compare your skills to another person.

But outside of track races and friendly competition, there are many more scenarios in life where people are asked to measure up against their peers—even though their race to the finish line was so different, they’re practically incomparable.

Take the journey to become a PT professional, for instance. Students face unequal barriers to pursuing the profession—and often, those barriers closely follow racial and socioeconomic lines. We’ll show you what we mean.

Let’s follow two imaginary students, Hansle and Jasmine (lovingly named after the 2021 Olympic gold medalists for hurdles) as they hurdle their way toward their futures as PT professionals. In this scenario, Jasmine and Hansle both excel in science, struggle in math, and perform passably well in their other high school subjects. They attend the same high school and live only a couple miles apart. They should theoretically face the same number of hurdles to becoming a PT—but they don’t. In this scenario, Jasmine is a white American teenager and Hansle is a Black American teenager—and the race they’re running is not the same.

Because of the extra income, Jasmine’s parents were able to offer her more opportunities in high school. She had access to a private tutor to help her with math, and her parents paid for her to take one dual-enrollment and one AP course. She joined the school’s soccer team and quickly became team captain, and she volunteered at the local food bank every other Wednesday after school. When SAT and ACT testing season rolled around, Jasmine’s family signed her up for a (paid) test prep course.

Hansle’s family did not have extra money to pay for a private math tutor. When he needed help with his homework, he had to seek out the teacher after school during their office hours (which were only available twice a month). He wasn’t able to sign up for dual-enrollment or AP courses either. He wanted to join the school’s soccer team, but his parents said he’d need to pay for his own equipment. He got a part time job and joined the team, but because of his job, he couldn’t dedicate enough time to the team to become captain—and he definitely didn’t have time to volunteer at the local food bank on Wednesdays. When SAT and ACT testing season rolled around, Hansle’s family couldn’t spare the money to sign him up for a test prep course; he had to study on his own.

Jasmine and Hansle both decided to attend the same university before pursuing PT school—one that only accepted a limited number of students each year.

Thanks to the extra tutoring, Jasmine’s application showcased an excellent GPA and excellent SAT and ACT scores. Her enrollment in college-level courses stood out to the people who were evaluating her application—as well as the fact that she was captain of a sports team and a frequent volunteer in her community. Her essay, which she had written with guidance from her post-grad parent, was moving. She was accepted immediately.

Because Hansle didn’t receive much extra tutoring, his math grades brought his GPA down from “excellent” to “good.” His SAT and ACT scores were also considered “good.” The people who evaluated his application thought it was admirable that he held a job so young, but they were disappointed that he didn’t have more extracurriculars on his track record. His essay, which he had written using generic advice he found online, was good but not noteworthy. They sidelined his application until they reviewed the rest of the hopefuls—but eventually decided to accept him into the student body.

Hurdle Three: Some students have the benefit of financial support—some don’t.

Both Jasmine and Hansle applied for financial aid before going off to college. They both received enough grants and scholarships to cover 70% of their undergrad education and living costs.

Jasmine’s parents offered to cover the other 30% of their daughter’s college expenses so she could focus on her classes. Because she didn’t have to pick up a part-time job, she focused on her academics and landed herself on the College Dean’s list. She actively participated in several college clubs (including the school’s Physical Therapy Club), and her open schedule allowed her to apply for an unpaid internship as an aide in a local PT clinic.

Hansle’s parents were not in a position to cover the other 30% of his collegiate expenses. He took out a loan and picked up a part-time job (30 hours a week) in order to pay for school. He focused on his academics as much as possible, and while he joined the school’s Physical Therapy Club, he did not always have the time to participate in club meet-ups and networking events. He thought about applying for an unpaid internship in a PT clinic—but the schedule conflicted with his part-time job, and so he did not.

Hurdle Four: Like with general college admissions, excellent PT programs and residencies are more likely to accept students with high GPAs, awards, and a plethora of extracurriculars.

So, what’s the takeaway here?

At the end of this hypothetical race, Hansle and Jasmine both crossed the finish line; they both entered the PT field. But the racetrack they followed was very different. Hansle had to contend with significantly more obstacles than Jasmine—simply because he didn’t have access to the same type of generational wealth. Jasmine was always more likely to succeed because she had access to more opportunities every step of the way.

Both students worked their butts off—but Jasmine always had an advantage. And while everything worked out in this hypothetical situation, there were many points where Hansle could have easily failed in his quest to become a PT. He could have failed to get into undergrad and graduate school. He could have dropped out of school altogether because he couldn’t afford to pay his bills and dedicate time to his studies. He could have been turned away from residency in favor of other applicants like Jasmine.

This is the reality for so many BIPOC students who seek education beyond high school. Because of America’s tangled and sordid racial history and how it impacted the distribution of wealth and social rights, white students are more likely to have access to opportunities that Black students (and other students of color) do not.

Rizing Tide offers opportunities to students who need them.

This is exactly the problem that Rizing Tide aims to help solve. By offering scholarships to BIPOC students, the Rizing Tide Foundation hopes to do its part to level the playing field. The team wants BIPOC students to have equal access to secondary education—and we especially want BIPOC students in the medical field, where representation is deeply important.

Want to contribute to leveling the playing field? We’re about to begin our first-ever call for donations. Sign up for our newsletter so you can contribute when it begins!